All the elements that compound the Biogas2PEM-FC project semi-pilot scale prototype are already in the demo site. During this week both the platform containing the anaerobic digestion subsystem and the structure containing the remaining elements have been transported to SCA San Isidro, at Loja (Granada), where the prototype will be finally deployed. 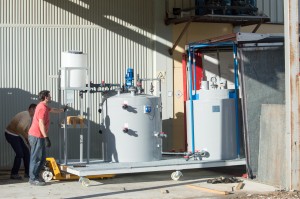 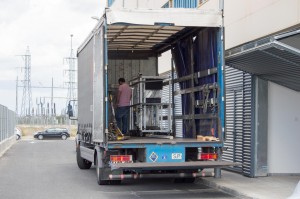 An adequate space had been reserved in one of the industrial bays of the olive mill. A forced ventilation system is available in this facility, as it is partially used to store fertilizers. Transportation of structures and needed gas cylinders was done using lorries. Unloading was performed throughout the loading dock of the facility. Both platforms had been equiped with wheels to ease their placement inside the industrial unit.

During the next few weeks final integration works will take place at the cooperative. Once the prototype deployment is complete and it is fully operative, the digester vessel will be loaded up with raw residue to start the anaerobic digestion process. Simultaneously, and while the generated biogas fulfills the gasometer, other tests will be conducted over the reforming unit and the fuel cell, using artificial fuels from gas cylinders.