After some days of hard work, deployment of the semi-pilot scale demonstrator for the project has been carried out. The platform containing the anaerobic digestion subsystem was placed beside the structure containing the other subsystems, both inside an industrial unit at SCA San Isidro at Loja. The conduits that interconnect them have been done using polymeric plastic tubing, along which proper equipment (pump, flame arresters) is inserted. The output from the pressure relief valve of the biogas tank is directed outside the building for safety reasons. 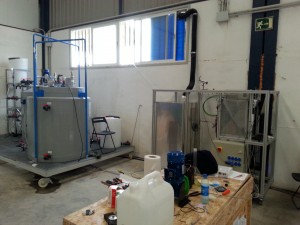 All the sensors concerning the AD subsystem have been integrated into the electrical panel, as well as the actuators (mixer, heater, pH stabilizers dosage pumps, etc.). Now, the user can check all the variables of the prototype (AD ones, Reformer ones and Fuel Cell ones) at a glance, using the Labview application where the Distributed Control System has been implemented.

The gas cylinders needed for testing and operating purposes have been secured outside the facility, and adequate protective housing has been installed to guard them against the rain. Gas conduits enter inside the building through a hole drilled into the concrete wall, while gas exhausts from both the reformer and the PEM-FC are vented outside throughout proper tubing.

Once the prototype had been installed, the digester was filled according to the proportions stated in WP1, namely 480 liters of pig manure, 80 liters of SOMW and 80 liters of OMW. Modest quantities of reagents had to be used in order to stabilize pH around 7.0 to meet the optimum conditions for the AD, studied by LEITAT during WP1. The digester was then sealed and its heating and mixing systems were activated. Biogas generation became evident after a few days of operation, and remains active till the moment, showing similar productivities to the ones observed during laboratory scale tests.