Last Friday, the 11th of April of 2014, the fuel cell for the Biogas2PEM-FC was received at Idener’s HQ. Since a couple of months ago, PowerCell and KTH have been working together in the construction of the complete Fuel Cell Subsystem. The main element of it is, obviously, the fuel cell itself. It consists of a 20-cells S1 model whose membranes have been modified, according to WP3 results, in order of be able of handling the level of impurities that might appear within the produced reformate gas. 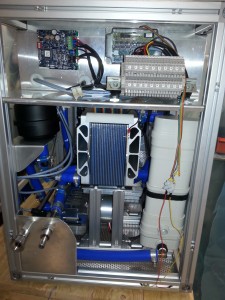 This fuel cell comes along with the rest of auxiliary equipment, including an air mover to pump oxygen into the cathode, a radiator with its corresponding fan to dissipate generated heat, an air bleed to further reduce CO molar fraction present within the fuel, a coolant pump to refrigerate the fuel cell, a heat exchanger to equilibrate the fuel temperature and, finally, an humidifier to meet moisture requirements in the cathode side.

The received subsystem includes a series of pressure and temperature sensors to get feedback of the state of the conduits, which allows the user to operate controlled variables until desired set-points are reached. Finally, the fuel cell includes a Cell Voltage Monitoring device, which periodically measures and sends, via CAN bus, updated voltage data for each one of the 20 cells of the stack.

Idener is already working in the control and integration of the Fuel Cell with the other subsystems to deploy the complete semi-pilot scale prototype.