Idener has just finished the integration of two out of the three main subsystems that compound the Biogas2PEM-FC semi-pilot scale prototype. After 3 weeks of work at their facilities both the reforming subsystem and the fuel cell subsystem have been mounted over a single structure made of 45×45 mm aluminium profiles, designed specifically for that purpose. The conduits between them and to vent have been installed using stainless steel tubing. Proper manual valves, electrovalves, check valves, flame arresters and water trap for condensates have been inserted along the tube. A flow meter placed inmediately before the anode input allows the user to verify the fuel flow and to stablish desired setpoint for it. 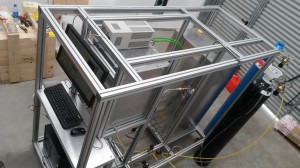 Distributed control system (consisting of a PC and an electrical panel containing acquisition boards, fuses and safety switches) has been also integrated within the supporting structure, as well as the electronic DC load. Gas sensors have been included for safety reasons to detect any eventual hydrogen or biogas leak. An IP video camera is placed on top of this structure, so that it is possible to visualize the state of the load or other surrounding elements, such as the gasometer once it is installed beside the structure.

This DCS includes a complete control system for the fuel cell, allowing its manual or automatic operation. It has been built using Labview and comprises the acquisition of sensoring data, the calculation of the control actions to be taken and its translation to physical signals. The DCS allows autonomous dairy datalogging and it can be operated remotely.

In the next week the structure  will be moved to the demo site for its definite deployment and final integration with the anaerobic digestion subsystem.